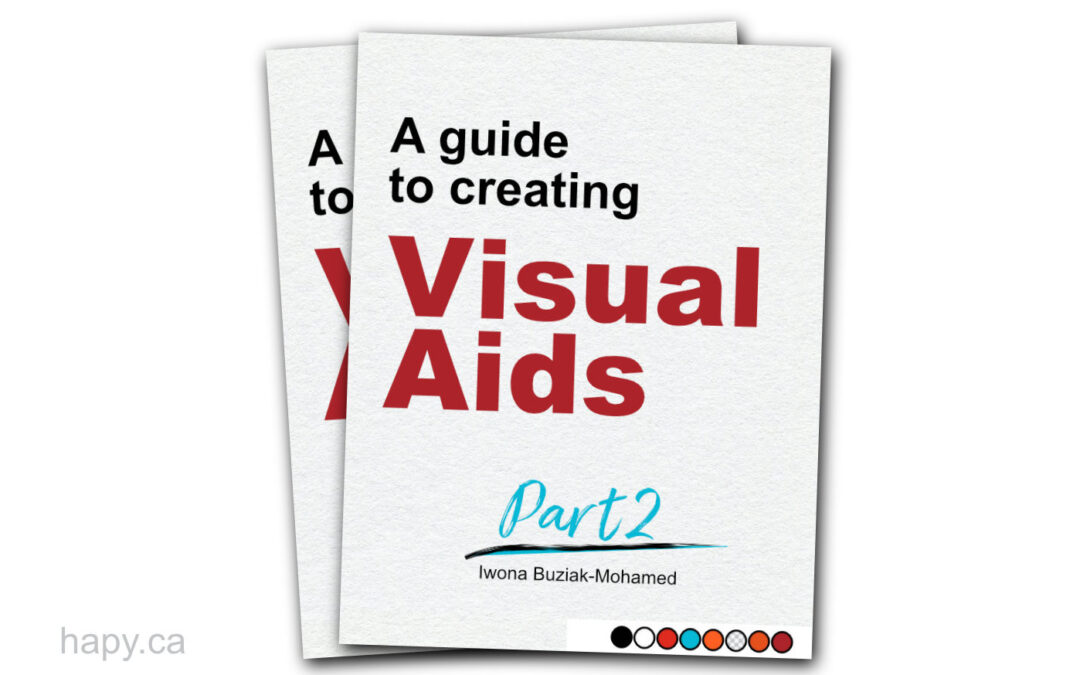 A guide to creating visual aids—Part 2

In Part 1 of this Guide to creating Visual Aids, we categorized visual aids into three groups:

If you have not read Part 1, here is the link to it: A guide to creating visual aids-Part 1

This time, we will analyze three most important elements of creating visual aids.

Elements of an effective visual aid

Creating a visual aid doesn’t depend so much on your ability to draw. You can use props, photos or illustrations and graphic design.

An effective visual aid depends on the analysis of three elements:

Let me explain what I mean with some examples.

It could be especially effective in nursing homes and hospitals that have a problem of communicating with patients and food wasted because of that. The message on their menu is simple: make a choice of what you want to eat but many people can’t read the menu and don’t make any choices. In these situations, there is only an option of a default meal, which may not have been people’s choice had they understood what their options are.

This example was inspired by one of the local nursing homes. Their menu is printed on a large sheet of paper filled with small text that looks like a document. It is basically impossible for many people to read it.

Instead, if people were provided a simple choice between just two items but in a visual format, the possibility of them choosing one would increase.

The example I am using here is Daily Dozen: a Visual Exercise Guide for Seniors 65+. The best way to create a visual aid here is using a narrative illustration of a person exercising.

It can be installed it on a wall such as a senior residence hallway wall and be available every time a person passes by to increase the possibility of interaction.

This project was inspired by the Canadian Physical Activity Guidelines for 65+ which did not have any graphics to explain their suggested exercise routine.

A visual aid containing narrative images is more complicated because it has to show action but its use can be very effective.

Here you can obtain a PDF copy of Daily Dozen: Visual Exercise for Seniors 65+.

Or buy a printed version available on Amazon.

Just like in the first example, it is about a choice but this time it is more complicated and abstract, so it is harder to create a visual aid. In abstract ideas it may seem difficult to point out the essence, but once you do, it is easy to suggest an image type.

The best image type to explain the concept of an election to our community members is a series of familiar objects in a poster. We have three categories of food with three representatives in each group. We use fruits and vegetables to explain the options to choose from in a way that can help tell a visual story rather than facts.

At the end of the poster there is a section to cut a ballot and cast a vote. It is a good way to interact and have a winner too.

An abstract idea may look like the most difficult of the three but if you dig deep into the essence of your message you will find out that it is not different than the previous ones. Then you can use objects, narrative images or a mix to create a visual aid that can help you communicate your message.

To recap, we need to analyze: 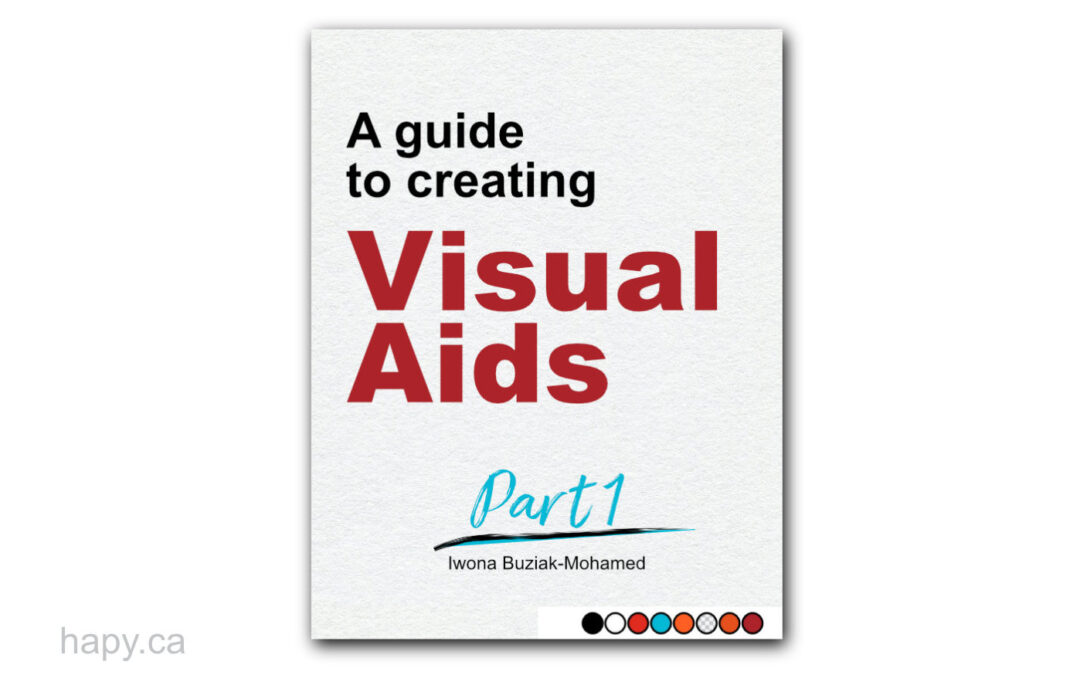 A guide to creating visual aids—Part 1

What is a visual aid

Many people don’t know how to create a visual aid. So let’s talk about visual aids. First, let’s ask a few questions:

According to a dictionary, “a visual aid is an item of illustrative matter such as film, slide or model. Why do you need one? To supplement written or spoken information so that it can be understood more easily.”

I would add from my own experience learning the language, it can be any physical object that can help you show what you are talking about. It can be made or found ready.

How to choose a visual aid

How to categorize visual aids

You can categorize visual aids in many different ways, but for the purpose of this exercise I categorize them by three groups which have to do with people I aim my message for.

Let me tell you about each of these groups.

I call a “Public Group”, a crowd that can pass by and I don’t know these people but I need to communicate my message to them. They actually could be speaking the same language as I but, using a visual aid makes perfect sense instead of trying to talk.

One summer I was challenged by a couple of thieves who were stealing from my property. It made me feel watched and unsafe. I had to figure out how to communicate with them so they could stop coming back, but I didn’t know who they were. Anyone passing by could be them.

So I installed a sign outside saying: 24-hour video surveillance and a camera and they stopped coming. I think the sign and a camera worked well as my visual aid.

I call a “One-to-One group”, a couple of people who communicate using visual aids that are meant only for them. It could be a note, a postcard, a sign that only they understand.

My husband writes me a lot of love notes and doodles hearts and arrows on them. They are always around the house. I know they make us look like a couple of third graders in love. But he makes these notes for me to make sure I remember he loves me and also they make both of us feel good.

The visual aid here doesn’t need to exist, but we chose to communicate visually as a part of building our relationship in a fun way.

I call a “Me Group” a group that only I belong to and the visual aids I can use for myself as reminders, or memories, for example.

The summer I had been targeted by thieves, most of my days I worked outside the house so I could watch the neighbourhood. To have a reason to stay outside all day every day for at least a week, I took on the project of fixing the body of my car. I felt a lot of negative energy caused by the thieves coming to my property so I needed a boost of positive energy.

I used my Toastmasters paper notes and taped them to separate the areas I needed to fix on the car. It was a great visual aid. Not only did I recycle the paper, it reminded me of what I was learning and it made me smile too.

When you deal with life challenges, usually you don’t have any doubt what visual aid can help you communicate your message. As long as you know who it is you want to address your message to whether it is:

You will figure out a fast way to create a strong visual aid. 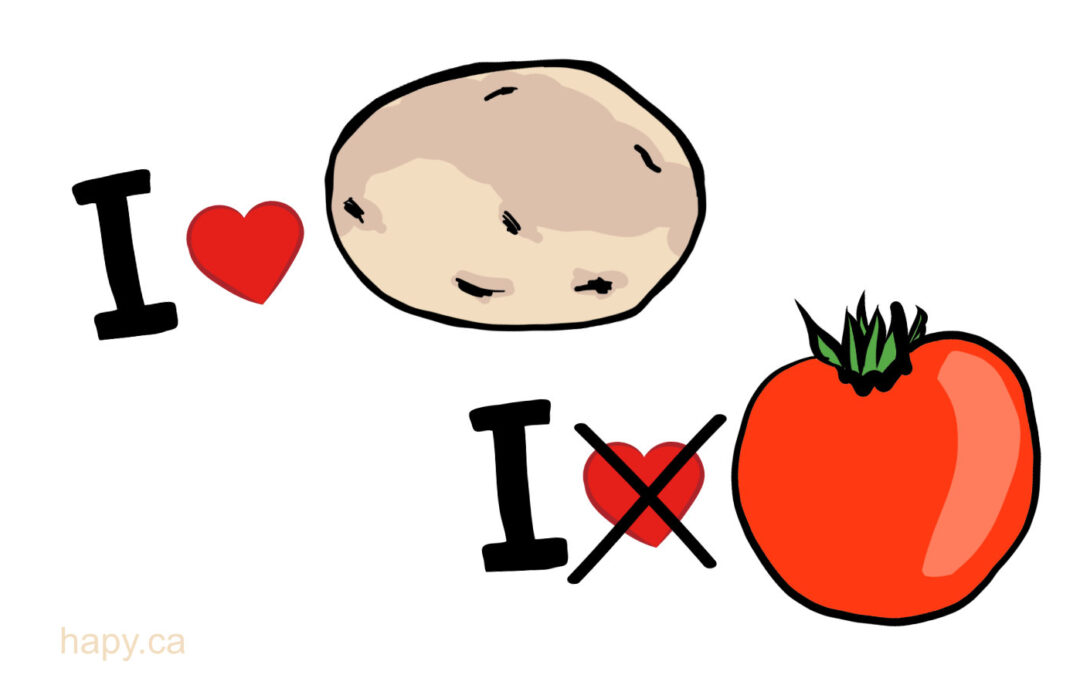 What is a Visual Language

Did you ever hear the proverb:

“The eyes have one Language everywhere” (English Proverb)

It means that no matter what language you speak, when you see a picture, you can interpret the information much easier than words.

Language barriers are the # 1 obstacle in communication for immigrants. These barriers isolate people from the community and services/programs that would be available to them. Not being able to communicate may become time-consuming and frustrating for both the individuals assisting immigrants and for immigrants who don’t speak English or French.

Despite the efforts of individuals and organizations to ease the communication—there is still room for improvement. One way to do this is by using more visual communication tools. There are many benefits to using pictures instead of words.

Using pictures to communicate is nothing new to people.

My father immigrated to Canada when he was older. He learned enough English to be able to work and support himself and his family, and yet he could barely hold a conversation… Before passing away he spent over a year in the hospital and eventually a nursing home. One day I went to visit him while the nurse was trying to talk to him. Within minutes she became louder and louder—and he became more frustrated. He wasn’t deaf—he just couldn’t understand her.

Had the nurse showed him a simple picture—the whole conversation would have been more timely and pleasant.

Do you know someone who is isolated because of a language barrier?

Use visual cues when communicating with individuals that have a language barrier. Avoid speaking louder if the person you are talking to can’t understand what you are saying. Let the pictures do the talking.